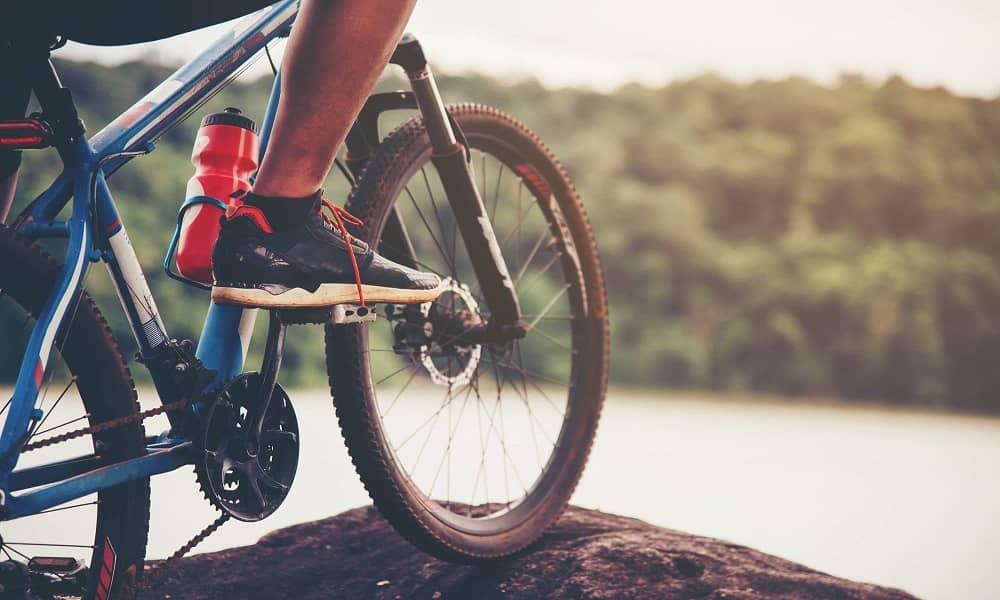 Electric Bike or in short E-Bike is a new trend that cyclists are getting into. Though it is a new tread and type of bike, People used to modify their cycle with motors in the past. But in modern times, where electricity is abundant and available everywhere people are getting into E-Bikes more.

There is a common myth that E-Bikes are similar to scooters. But it is not true. In fact, E-bikes look like a regular bike that just has an additional electric motor and a battery.

Though an E-Bike looks like a regular bike, there are some differences. Let’s discuss the difference between them.

An E-Bike has the same handlebar as a regular bike. There is no difference between the handlebar but the components that are attached to the handlebar.

An E-bike handlebar had additional displays, meters and switches attached to the handlebar. Switches to control the electric motor of the bike and displays and meter to show speed, remaining battery percentage, etc.

The battery is the one thing all E-Bikes have attached to the frame. Most of the bike has a portable battery that can be ejected are charged externally. It’s a bit big and weighty part of an E-bike. Though the latest E-bikes have a flat smaller size battery. A battery of an E-bike usually takes a 3-hour average time to fully charged and can provide power for the motor for almost 40 miles on averagely.

Most E-bikes comes with a brushless motor of 500 Watts. A good motor can be boosted to 750 Watt at peak. This motor doesn’t usually do the acceleration all by itself. You need to pedal your bike for acceleration then the motor will take the lead for the rest. Keep in mind an E-bike is not fully powered by an electrical motor. It will help you out while riding by saving energy.

Most of the E-bike has speed limits by the rules and law regulation. If you exceed this speed the motor will automatically cut out from the power that the battery provides. For the UK the speed limit is 25 mph.

There is no difference in the appearance between an E-bike and a normal bike. E-bike is the superior version of a normal bike with a motor and a battery. So in appearance, both of these bikes are the same.

So the only difference you could find in the driving system that includes a display, battery and motor for the E-bike.

As we have discussed that an E-bike has the same components as a normal bike. So the maintenance for E-bikes is the same as normal bikes. Means, you can repair your bike in any normal bike service center.

But for the battery and motor maintenance, you might need to take it to an E-bike specialist.

Most people think that E-bikes need more maintenance than normal bikes. But it is absolutely wrong. Some think that the battery gets wicked faster. The defects in the system of an E-bike and in its motor is extremely rare. It is built that way. And you should not believe in those wrong beliefs. Also, you should not worry as most of the E-bikes come with long warranties. So if anything happens to your E-bike just take it to them for service and they will do the rest.

The Experience in the Riding

Now the big questions, ” How to ride on an E-bike? How does it feel? How Much it varies from a regular bike?

The answer is not that simple. Though Riding an E-bike is exceptionally different than any other bikes.

An E-Bike usually doesn’t run fully depending on the motor and its battery. You have to start pedaling to start your bike. It doesn’t usually start from the power of the motor. After a while, the motor will take over. It will provide a uniquely comfortable ride where you don’t have to pedal always. This way you can save a lot of energy and ride for more time in long rides.

The transition of the motor kicks in while you start pedaling your bike. It is so much smoother that you can hardly notice. And the power it will provide alone the ride will never let you to reach your breath limit while riding uphill or tackling strong headwinds. In simple words, E-bikes make pedaling felt effortless.

After all the assistance from various electrical equipment, an E-bike should have much more speed, right?

Well, that depends on the rider. If you ride an e-bike regularly you can easily ride it to its top speed depending on the roads and traffic. E-bikes are not that fast compared to motorcycles but they are pretty fast and easy to speed up. So if you are not a pro or experienced rider and don’t have good control over an e-bike then you shouldn’t ride an E-bike at a faster speed.

Rules and Regulations for E-bikes

It’s a common concern people have that E-bikes are controlled and should be abide by the rules of a motorcycle. It is true, that E-bikes are considered motorized transports but the rules and regulations are not the same as motorcycles for an E-bike. In fact, the is not distinct law for riding an E-bike till now. Though as motorized transport, some govt. subjected it to its speed and power limit. But this usually doesn’t bother a rider.

There are some rules and regulations on the speed of an E-bike.

In EU regulation, you can’t exceed the speed of an E-bike over 25 kmh or 15.5 mph. Electrical motors are programmed to cut out over that speed and you need do pedaling to ride the rest of the way.

The answer is direct no. Why?

Well, an E-bike won’t help you in speeding up as described above. It can just help you to maintain speed and provide comfort in riding. Thus, riding an E-bike isn’t cheating except for races. Races are held with particular types of bikes that are categorized as similar and e-bikes come in all types and they still need to be popularized for races.

Right Bike for you

E-bike or regular bike? Which is right for you?

there is no direct answer to the question. Why?

Because you should consider a lot of factors before getting the right bike for you.

Think about these first.

If you are going to use to for commuting or traveling long distances then getting an E-bike will be a really good option. If you think if are no fit and will be cycling in local areas filled with steep roads then the only option is also an E-bike. It could make your ride more comfortable and easier. If you have a good budget going for an E-bike is the smartest choice if you are not willing to push and exhaust yourself.

On the other hand, if you want a bike just to ride in parks on holidays and won’t go for long rides then getting a regular normal bike is a good option. On a tight budget, a normal bike is the only option as E-bikes are very expensive.

So choosing a bike is a very personal choice of yours. Think about the factors then get one.

You now know all the differences between an E-bike and a normal bike. Just take all the factors on your account and get the best one which will perfectly suit you. Stay safe and Happy cycling.